To create their product, the team researched shock-absorbent materials. They chose a material that is not commonly used by other companies to make their product unique. They started looking into factories to produce their product to save them time and patents to protect their idea. The students have also looked into how they will begin marketing the phone case. Last year, the Nine Lives team met with the Chief of Engineering of Otterbox. He gave them some tips about the design of the phone case, selling it, and advertising it. They used the feedback to prepare for the ESTEAM Pitch Competition. 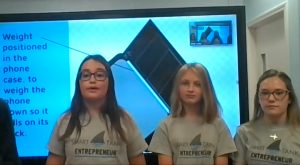 The slogan for the phone case is, “Nine lives phone case always lands on its feet, not its face.” Nine Lives is a folio-style phone case. It has a flap that folds over and has springs to help it fold back to snap shut when dropped. The spine of the case is weighted to make it fall on its back. The folio pocket also allows for extra storage of credit cards, etc. The idea formed when Madison kept dropping her phone and was worried that the screen was cracked each time. Their target market for the case is young to middle-aged active and working people that need to use their phones frequently.

The Nine Lives team participated in the spring ESTEAM Pitch Series before returning to compete in the December competition. Their engineering teacher, Scott Miller, said “Last year I had three teams that made it to the finals in the ESTEAM Competition for the Western Carolina region. Nine Lives was the only one that didn't place, so I had a team that placed second last year, I had a team that placed third last year, and Nine Lives did great, but they didn't place. I was so pleased that they came back this year. They're my only team that participated in the final 15, and they placed third. So the perseverance, the resilience, the grit, the determination, and the improvement on their product is just phenomenal.”

Each student described what they learned from the competition.

“I think it was a great engineering experience and also a business experience because in the future we're going to have to know it if we make a product.”-Emelyn

“During the competition, I learned that teamwork is like the saying “teamwork makes the dream work”. If we didn’t have all our teammates trying their hardest and putting their effort into it, we probably wouldn’t have placed because honestly, it was a team effort. It was really fun working with the team, and I hope we can do it again next year." -Madison

EntreEd recognizes the vital contribution educators made in supporting the competition. Nine Lives educator mentor, Scott Miller described his experience with the competition as the following, “Any chance to translate whatever we're doing in the classroom into some real-world project, I like to take advantage of, so when it was presented to me I just jumped at it. You have science, technology, math, all those things together, but as you sit with entrepreneurship, it's really about an idea. It's about an idea that fits somewhere into a market that fulfills a need for somebody else. I mean that's the heart of STEAM too because what is STEAM really all about? It’s creating stuff to add value. What I like about this so much is it levels the playing field. Kids who may struggle with math or may struggle with English win my competitions frequently. Because it's hands-on, and they really excel in that environment.”

The Nine Lives team has big plans for the future. Their next step is participating in another pitch competition, Smart Tank. They are currently working on developing a physical prototype to share. Madison said, “When we get older and if we decide to start our own business and have our own product, I feel like we won’t be as nervous because we’ve already had this experience and we know how we should set everything up and then can just keep moving forward and not give up…Entrepreneurship is you're being creative, but while doing that you're also making something that can help someone.”

To hear the full story, listen to the team’s full episode of the EntreEd Talk Podcast on iTunes and Spotify, and watch their pitch. The ESTEAM Pitch Competition was created as an initiative of EntreEd’s Fostering Self ESTEAM in Appalachia’s Emerging Workforce project, funded by the Appalachian Regional Commission (ARC) and the Claude Worthington Benedum Foundation. The project helps middle and high school programs in a seven-state region infuse Entrepreneurship into academic classrooms with a focus on STEAM (Science, Technology, Engineering, Arts and Mathematics) initiatives. To learn more about the project and the ESTEAM Pitch Competition, contact Amber Ravenscroft, ESTEAM Project Director, at aravenscroft@edvgroup.org.