Igniting the Entrepreneurial Flame in Students

Jackson City School in Breathitt County, Kentucky has continually been an exemplar of sustaining entrepreneurial culture through sharing EntreEd’s mission and the America's Entrepreneurial School Program with their students. The school hails from a small, independent district and serves K-12 students in one building, but the impact that they are making on their students’ futures is quite large. JCS Library Media Specialist & STEM educator, Sarah Trent shared about the changes that EntreEd has made in their school and for their students through entrepreneurship education.

Trent said, “About four years ago, we started with EntreEd and have had wonderful success. I'm blessed to be in a K-12 setting, so we got to implement this program from the ground up. We’ve been in multiple competitions, had multiple projects, we’ve had our high school students compete in the regional and state competitions with the state of Kentucky and get second place in one and third in the other. We've had our middle schoolers compete in the Morehead State University Regional competition. They won that in two different divisions. That was one of our biggest successes and our school is over one hundred years old. We have Governors School for the Arts and Governors School for Entrepreneurship and never had students even apply. They never thought they knew what it was like to be an entrepreneur or were capable of doing it. Since we’ve implemented EntreEd, we’ve had two students get into the Governors School for Entrepreneurship. They got to go to a five-week summer program and be immersed in what it is like to be an entrepreneur. Then they got scholarships to attend universities. This program has not only influenced from early elementary all the way up to high school, and now it's empowering our students to believe in themselves. We have agriculture programs that have started because of EntreEd. They're selling items. They're seeing themselves beyond their limitations. They really thought because of being from Eastern Kentucky and because we’re not entrepreneurs, they didn’t understand that they had it within them, that they were able to be an entrepreneur, and what being an entrepreneur really means. It has really empowered them. Every year now we have kids saying “I can be an entrepreneur”. They got these scholarships. Now we have sophomores looking at me saying “I really want to do that.” It's really exciting seeing the changes that have occurred because of EntreEd.”

“It’s like the flame had to get started and that's what EntreEd did because I wasn't even familiar with it. We got invited to an EntreEd conference. I'm always willing to try new things if it can help my students. We got to that conference and we learned about it, got so excited about it, and brought it back. This is my biggest thing, what you have to know as educators, you don't have to do all the work, you just have to light the flame. You have to light the flame and the kids will take it. You just have to be there to kind of push them and help them. They will run with it. When they competed through the middle and high school competition, they competed against juniors and seniors in high school, and they won. At first I was like, you know, middle school, they're just in seventh grade. But they work hard, they believe in themselves, and it has empowered them.” 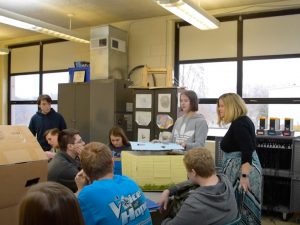 Natalee Combs, one of Trent’s upcoming eighth grade students is a great example of the change that has been at Jackson City School with entrepreneurship. She started competing in entrepreneurial competitions when she was in fifth grade and has already won three. She’s excited to continue to have entrepreneurial experiences and already said that when she’s a junior, she wants to apply for the Governors School for Entrepreneurship. Sarah Trent said,

"Before that was never an idea, but then this started. She's actually one of our first. She started in fifth grade and she's competed every year with projects. They actually donate the money to causes, and it's just wonderful to watch them blossom over the years with this program.”

“We created a business called Teacher's Petz where we clean and decorate teacher’s classrooms for profit and donate part of the money to different charities. Last year it was a lot different than before because of the pandemic. We had to get approved by OSHA to be certified cleaners to clean the classrooms. We got a grant to get the materials to clean. We also used to have a business called Sneaky Snacks, which basically had hidden compartments to just help kids sneak food into class. I think these entrepreneurial experiences have helped me get used to how it works, and I think that if I wanted to choose it as a career whenever I'm older, I'll be more familiar with it. It’s empowering.”

The America's Entrepreneurial Schools (AES) Initiative is a program designed to recognize K-12 schools that have provided entrepreneurship education to every student, every year. To earn the designation, schools must provide an entrepreneurship experience to every student in a school building in a given year. Schools may earn this designation on their own, or with the support of the EntreEd team via structured professional development and additional support. EntreEd's projects in Appalachia are funded by the Appalachian Regional Commission (ARC) and the Claude Worthington Benedum Foundation.